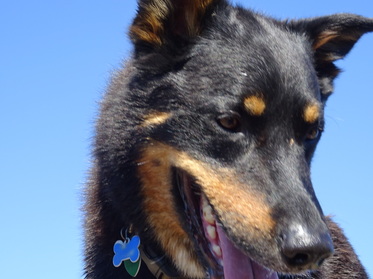 Seven years ago I brought home a terrified, traumatized pup. He has taught me everything I know about working with shy and fearful dogs and he is still teaching me.


I adopted my dog TT (short for Tom-Tom) from the WAG (Whistler Animals Galore) shelter in January 2010 when he was seven months old. TT was a semi-feral pup, part of a litter that had little human contact, born in Mount Currie in late May 2009. People dedicated to the welfare of the dogs in that area, trapped the litter during the summer of 2009 in order to take them into rescue, but TT remained elusive until he was finally trapped and transported to the shelter in October 2009. When he came home with me and Sophie in January 2010, he was afraid of his own shadow, and of me, but he had instantly bonded to Sophie.

From the beginning, TT and Sophie had a special relationship. They were instant, loving friends. It's only because of Sophie that I was able to bring TT home. I couldn't even touch him - he would shy away from me - but he adored Sophie and followed her everywhere. I learned to be patient and not push TT. I learned that the best way to gain his trust was to help him feel safe, to wait and let him decide to come to me when he was ready. I took care not to overwhelm him with too much at once so that he wouldn't panic. I learned that, when I paid attention to Sophie, he was watching and learning. TT learned to trust people, including me, from Sophie.

Today, TT is a friendly, loving dog who is comfortable with people and can handle most social situations. He will always be a shy dog, but he no longer panics or hides when he meets new people or more than one or two at once. He has come a long way and is a joy to be around because, by nature, TT is a happy, happy dog who loves life.  Because he missed that early socialization though, TT is not comfortable with vet care and being handled by strangers, or even by me, when there is an intent behind the handling.  His experience points to how crucial socialization is for puppies and how important it is to teach your dog to cooperate in his own care.

Seven years ago I brought home a terrified, traumatized pup. He has taught me everything I know about working with shy and fearful dogs and he is still teaching me.