Hope is the thing with feathers
That perches in the soul,
And sings the tune without the words
And never stops at all.
Emily Dickinson 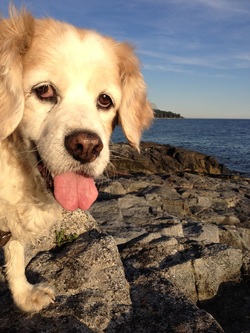 On September 3, 2016, my little spaniel Hope went to his final home.  Here is his story.

On June 30, 2010, I stepped out my front door and saw a small white blur running in front of my house towards a busy street close by. I was too late to stop the blur but, fortunately, a kind woman at the corner turned it around. The white blur then trotted up my driveway and that's how my dog Hope came to me. When I looked closely at him, I could see two things - he had the shape of a heart on his forehead and he had a lot of flea dirt on his coat. I didn't want to take him into the house because of the fleas. Since he still had an old rabies tag on his ratty collar, I was able to call the vet on the tag and they had a record of him. They contacted the original owner who said she had given him away years ago. The woman took no responsibility or interest in the fact that the dog she had had as a puppy, now 10 years old, was running loose - homeless, hungry, and ridden with fleas.

I took him to the place for lost and found dogs. I waited three days and when no one came forward to claim him, I brought him home and named him Hope.

Hope was a character! He was funny and sweet and his favourite thing in life, by far, was food - any food, anywhere, anytime!  He was a "bomb-proof" dog who got along swimmingly with every dog and person he ever met.  He followed me everywhere and walked just a few steps behind me on our hikes.

​There's a great big gaping hole under the sink in my kitchen now.  That's where Hope used to lie because he liked to supervise at mealtime.  How I miss my little dog with a heart on his forehead.